Burundi. Despite the ceasefire agreement signed by the government in December 2002 with the Democratic Defense Forces (FDD) and two smaller militia groups from the Hutu people, the unrest continued. The FDD and the army accused each other of violating the agreement and the second largest hutumilis National Liberation Forces (FNL) refused to negotiate with the government.

In January, at least 60,000 civilians fled in central B. after fighting between the army and the FDD. In March, the FDD accepted that foreign observers be sent to the country and at the end of April, the first contingent arrived from an African military peacekeeping force to monitor the peace agreement.

According to Countryaah.com, Burundi Independence Day is July 1. The two largest parties, the Hutud-dominated FRODEBU and the Tutsi UPRONA, signed a security-political cooperation agreement in March, which paved the way for the change of power which was a key issue in the 2001 agreement on a three-year transitional government. On April 30, Tutsier Pierre Buyoya handed the presidential post to FRODEBU’s leader Domitien Ndayizeye, who has been vice president since 2001. As new vice president for the next 18 months, Tutsier Alphonse Kadege, president of UPRONA, was appointed. At the same time, a Truth and Reconciliation Commission was formed to investigate all human rights violations since Burundi became independent in 1962.

The capital of Bujumbura was hit in July by the toughest fighting during the ten-year war when the FNL went on the offensive. For a week, nearly 400 people were killed before the army drove the rebels away. During the autumn, FNL was also involved in fighting with FDD. In early October, however, the FDD entered into a new agreement with the government. gave the Hutu organization several ministerial posts and seats in parliament. The FDD’s soldiers began to enlist in the army. The FNL was asked by the neighboring countries for the ultimatum to start negotiations within three months or “stand up”. But the group continued the violent act and was suspected, among other things. for the December assassination of the Vatican’s ambassador.

The international force of 2,700 men from South Africa, Ethiopia and Mozambique was complete in mid-October. In December, the UN Security Council decided in principle that the World Organization should take responsibility for it.

Despite all the peace efforts, Burundi was described by British business consulting firm Control Risks Group as one of the world’s three most dangerous countries. 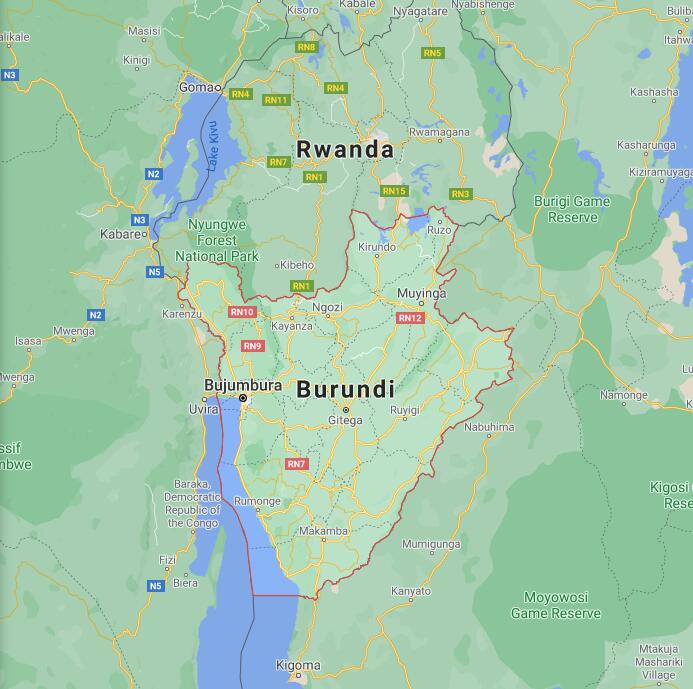 According to AbbreviationFinder, Burundi is an inland state in East Africa. It is bordered by Rwanda, the Democratic Republic of the Congo and Tanzania.

In September 1994, following a compromise between FRODEBU and UPRONA, a new president of FRODEBU, S. Ntibantunganya, was appointed, while Prime Minister Kanyenkiko was replaced in February 1995 by A. Nduwayo, supported by the more uncompromising wing of the UPRONA. The reconstitution of the political leaders did not affect the fate of the ongoing conflict, nor did it put an end to the atrocities committed on civilians, further damaged by the decision of the United States and the European Union to suspend, in April 1996, economic aid to the government, considered co-responsible for the continuing violence.

The government and presidency were then overwhelmed by a new coup, organized on 25 July 1996 by the former president Bagaza, following the decision, accepted by Nduwayo and Ntibantunganya during the regional summit in Arusha (June 1996), to have a multinational force to ensure essential services and protect politicians and civil servants.

Bagaza, with the support of part of the population (mostly Tutsi) opposed to foreign intervention, led the army to occupy the capital and, after dissolving the National Assembly and banning all political parties, proclaimed Buyoya interim president with the aim of restoring peace in the country. Following hostile reaction from neighboring countries and international public opinion, Buyoya announced in September the reconstitution of the dissolved Assembly and the formation of a council with governmental functions, but maintained the suspension of constitutional freedoms.

The declared commitment of the new government to fight a ‘total war against armed rebellion’ led to the intensification of clashes and violence, especially against the Hutus, against whom indiscriminate attacks were launched which caused, between 1996 and 1997, thousands of victims. At the same time, FRODEBU and the leaders of the Hutu movements, exiled to Tanzania, gradually lost influence not only on the ruling class but also on civil society, tormented by the war in progress as well as by the sanctions imposed in September 1996 by the Organization of African Unity, which economically isolated the country, and which were only partially revoked in April 1997.

Beginning in the summer of 1997, while violence against the Hutus continued in the country and incidents occurred at the border with Tanzania – which wanted to expel the Hutu refugees from its territory – the peace process began with great difficulty. In June 1998, following an initial rapprochement between the country’s leaders and FRODEBU, President Buyoya partially restored the 1992 Constitution, expanded the number of members of the National Assembly, where FRODEBU remained the majority, and formed a government of transition. After the summits in May, June and July 1998, in January 1999 a new peace conference was opened in Arusha, Tanzania, which once again highlighted strong friction between the parties.