Cameroon. During the year, UN-mediated negotiations were held with Nigeria on disputed borders between the two countries. In 2002, the International Court of Justice in The Hague granted Cameroon the right to, among other things, the Bakassi Peninsula on the Gulf of Guinea in an area with very rich fishing waters and probably large oil deposits. However, Nigeria had refused to follow the court’s decision, after which a joint commission was formed to try and find, under the UN leadership, a new solution to the ten-year-old border dispute. Negotiations ended with Nigeria announcing that Bakassi will not be surrendered to Cameroon until the earliest in 2006. However, in December Nigeria left 32 villages at the Cameroonian border near Lake Chad, while a Cameroonian village was transferred to Nigeria.

In July, the oil started to flow through a new pipeline from Chad to the port city of Kribi in southwest Cameroon. According to Countryaah.com, Cameroon Independence Day is May 20. The oil pipeline is one of the largest industrial investments to date in the region but has been very controversial, partly because it goes through ecologically sensitive areas and partly for both the affected the countries are considered among the most corrupt in the world. K. is expected to make about US $ 20 million a year in oil management when production in Chad reaches full estimated scale from 2004. 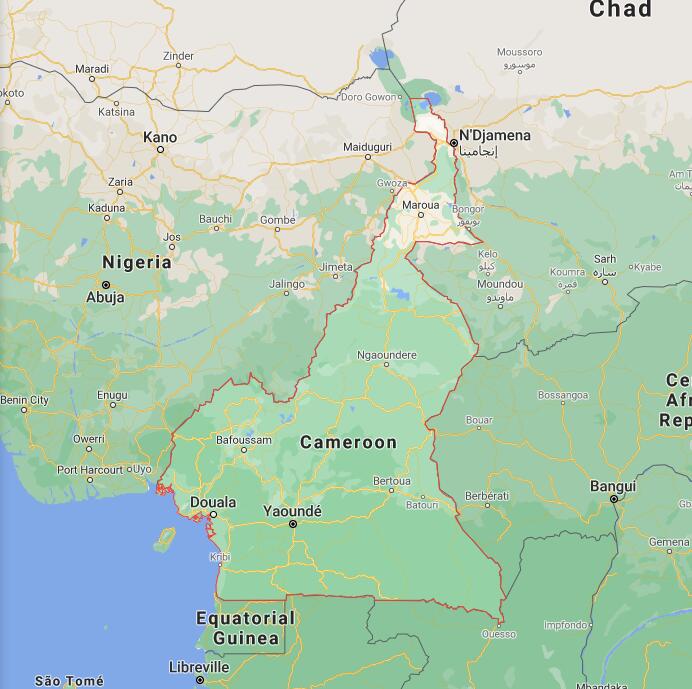 According to AbbreviationFinder, Cameroon is a united state in Central and West Africa. Its neighbors are Nigeria to the west, Chad to the northeast, the Central African Republic to the east, and Equatorial Guinea, Gabon and the Republic of the Congo to the south.

Cameroon has a coastline in the Gulf of Biafran, which is part of the Gulf of Guinea and the Atlantic Ocean. The country is called “Africa in miniature” because of its geology and cultural diversity. Cameroon’s nature includes sandy beaches, desert, mountains, rainforest and savannah. The highest point in the country is Mount Cameroon to the southwest and the largest cities are Douala, Yaoundé and Garoua.

Cameroon is home to more than 200 different ethnic and linguistic groups. The country is well known abroad for its music, especially makos and bikuts, and for its successful national football team. The official languages ​​of Cameroon are English and French.

After independence, the economic conditions of Cameroon have undergone ups and downs. A first phase of economic expansion, supported by foreign (primarily French) capital and accelerated by the discovery of oil fields exploited starting in 1975, rapidly advanced the country on the path of economic development. But around the mid-1980s the economy entered a phase of recession due to the exhaustion of the wells, as well as the fall in the prices of the most profitable exported products (coffee, cocoa). The result was a heavy debt with foreign countries and a deterioration of the entire social framework, with an increase in unemployment and in the state of poverty, which reached half of the population. Since 1997, the Cameroonian economy has begun to show evident signs of recovery, with an annual growth of more than 4%, supported by assistance agreements with international financial institutions. However, growth rates have remained far below the 7% which, according to the United Nations, should lead to a halving of the poverty level, and far below the aspirations of a state that has enormous economic potential.

Cameroon is still an essentially agricultural country, with 60% of the population living on land products. The sector is organized on the combination of subsistence (cassava, essentially) and commercial crops: among the latter, which provide about a quarter of export earnings, cocoa (166,800 t in 2005) and coffee (60,000 t) predominate. Other agricultural products intended for export are pineapples, cotton, peanuts, oil palm and rubber. The spatial distribution is varied and well articulated, adapting to the characteristics of the physical environment: cocoa occupies the central- and north-western areas, with plants largely renovated recently; coffee on the mountain slopes; cotton the northern irrigated areas (Benue valley), together with the peanut; rubber plantations have been developing on the coastal part. The zootechnical patrimony is very substantial (almost 6 million cattle and 8 million goats and sheep). Timber (mahogany, ebony and other tropical essences) is the most important export product after oil.

The quantity of oil extracted annually (3.2 million tonnes in 2006) is progressively reducing, in view of a slow depletion of reserves (estimated at around 55 million tonnes). Since 2004, a 1070 km long pipeline, built with financial support from the World Bank, has been transporting crude oil from the oil fields of Doha, Chad, to the Cameroonian port of Kribi. A promising resource is natural gas, with reserves estimated at 110 billion m 3. Bauxite, the main mineral resource until the 1970s, is still mined, but the Edéa plant for the electrolytic refining of aluminum processes mostly alumina imported from Guinea.

The industrial sector remains essentially aimed at the needs of the internal market. The largest industrial concentration in the country is Douala, with textile, chemical, food plants and a cement factory; primary processing industries of agricultural products are spread all over the world. The large hydroelectric potential provides about 90% (3.9 billion kWh in 2004) of the electricity produced in the country; a large power station on the Sanaga feeds the metallurgy of Edéa in particular.

Communications with foreign countries almost exclusively use the port of Douala. Internal communications are still unsatisfactory, with a modest road network and two railways of penetration that both move from Douala: the one, very short, reaches Nkongsamba; the other passes through the capital and arrives at Ngaoundéré (885 km), and should be extended to the territory of Chad. Airports in Douala, Yaoundé and Ngaoundéré.