Central African Republic. After averting a number of coup attempts and armed revolts in recent years with foreign aid, President Ange-Félix Patassé was hard pressed at the beginning of the year. Rebels loyal to former commander-in-chief François Bozizé and former president André Kolingba controlled about 70% of the country’s area, and in the capital Bangui, the state of supply began to get serious.

In March, General Bozizé took power while Patassé attended a conference in Niger. Thousands of rebel soldiers entered Bangui and fired the president’s aircraft when he returned from Niger. Patassé fled to Cameroon and later went into exile in Togo.

According to Countryaah.com, Central African Republic Independence Day is August 13. The African Union, the United States and France condemned the coup, but the domestic opposition joined forces with Bozizé and after a short time the new regime was recognized by CEMAC, the regional economic cooperation organization for Central Africa. CEMAC also decided to retain and strengthen the international peacekeeping force of approximately 350 people placed in the Central African Republic at the end of 2002 to protect Patassé.

74-year-old opposition leader Abel Goumba was named prime minister. Bozizé, who declared himself president, became Minister of Defense and several of his close associates also received ministerial posts. Former President André Kolingba, who was sentenced to death in 2002 for participating in a coup attempt the previous year, was granted amnesty and was able to return from exile in Uganda.

The Constitutional Court and the Supreme Court were dissolved and judges at other judicial bodies were replaced. Patassé was wanted internationally and was charged with murder, rape and embezzlement from the Treasury of almost one billion SEK.

Already in December, Prime Minister Goumba was dismissed after Parliament criticized his new election schedule. There was also dissatisfaction that the government had not been overcome with lawlessness. The new head of government was appointed the politically proven economist Célestin Gaombalé. Head of Central African Development Bank. 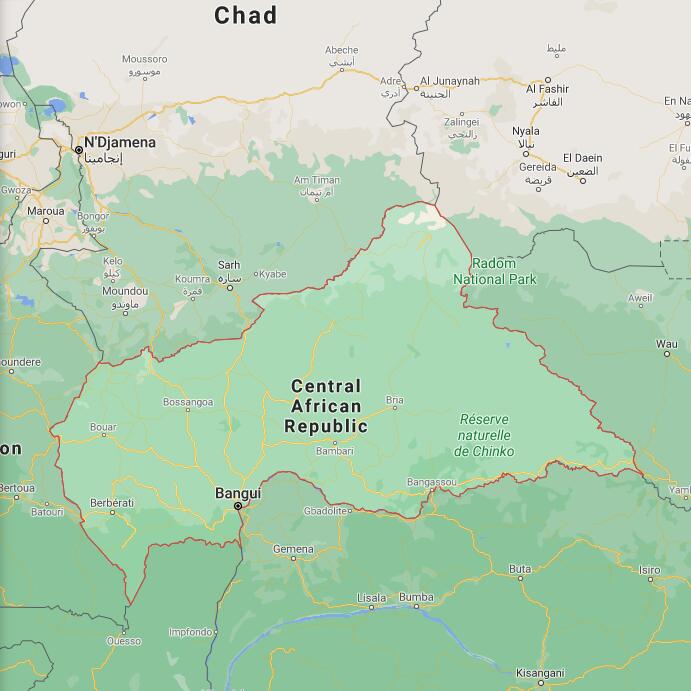 Like that of many other African states, the political life of the Central African Republic has undergone the heavy conditioning on the one hand by the power of the army and on the other by the direct and indirect intervention of the former colonial power, in this specific case France, which continued, thanks also to the maintenance of its own military contingents, to exercise a dominant role in the troubled events of the country.

In 1979 the end of the more than ten-year dictatorial regime of colonel JB Bokassa, one of the most brutal that Africa has known, did not mark the beginning of a normalization of political life and only in 1992 did it start, under the watchful eye of France, a thwarted and fragile democratization process, punctuated by mutinies and coup attempts. This complex change also took place in a difficult economic situation, shaken by the consequences of the 1994 devaluation of the CFA franc (Coopération Financière en Afrique, the common currency of French-speaking Africa), from the austerity measures imposed by the structural adjustment policy agreed with the International Monetary Fund, from the fall, in the early 1990s, in the international prices of coffee and cotton, the main export products of the country. A series of constitutional changes introduced in 1992 by gen. A. Kolingba, hostile to reforms but forced by international pressure, opened the way for change and led to the adoption of the multi-party system and the holding of the general elections, held in 1993, which saw the victory of the Mouvement pour la libération du peuple centrafricain, whose leader, AF Patassé, former prime minister since 1976 to 1978, he became president of the Republic.

A new Constitution, adopted in January 1995, after being approved by a popular referendum which had however seen a low participation in the vote, it strengthened the powers of the president and introduced a form of administrative decentralization through the creation of directly elected regional assemblies. Contested by the opposition, opposed to the strengthening of presidential prerogatives and worried about the scarce guarantees guaranteed to freedom of expression, the new constitutional charter did not help to resolve the elements of crisis, and the political situation remained uncertain and conditioned by a succession of military uprisings which had only been quelled thanks to the direct intervention of French troops. The picture was further complicated by the economic difficulties and the disruption of state finances that had induced the government, accused by the opposition of corruption and managerial inability, to suspend the payment of public sector salaries, causing strikes and demonstrations. Nor the signature in June of 1996 of a protocol with the oppositions for the formation of a government of national unity, nor the financial assistance agreement for the payment of public sector arrears, signed in the same month with France, were able to give a decisive change to the situation of precariousness and uncertainty in which the country found itself; in fact, while the discussions for the formation of the new government proceeded, another military insurrection took place in November. A part of the capital was occupied by rebel troops, who also claimed their belonging to a specific ethnic group, a connotation – the ethnic one – unusual in military uprisings in the Central African Republic. After long and tiring negotiations, which saw the mediating intervention of some African countries,1997, of a government of national unity and the replacement of French troops with a UN peacekeeping force. The legislative elections of December 1998 confirmed the Mouvement pour la libération du peuple centrafricain as the first party.