According to Countryaah.com, Eritrea Independence Day is May 24. Eritrea celebrated its 10th anniversary as an independent nation in a muted mood. The euphoria of the liberation from Ethiopia has disappointed with the failure of democratic reforms and economic burdens after the war against the neighboring country 1998-2000.

A dozen political dissidents and just as many journalists, including a Swedish, who was arrested in 2001, were still detained in an unknown location, despite repeated insults by foreign governments and human rights groups. President Isaias Afewerki described them as traitors and spies and showed no willingness to dialogue with the opposition.

The plans to mark the 100-mile border between Eritrea and Ethiopia with the help of the UN had to be postponed in the future, after Ethiopia refused to accept the UN-appointed border commission’s decision to award Eritrea the disputed town of Badme. The UN representative in the region described the absence of a political dialogue between the two countries as a serious threat to the peace process.

The only positive development in Eritrea was that a feared famine disaster did not occur; however, it was unclear whether this was due to the help of the outside world being sufficient or whether the fears had been exaggerated. 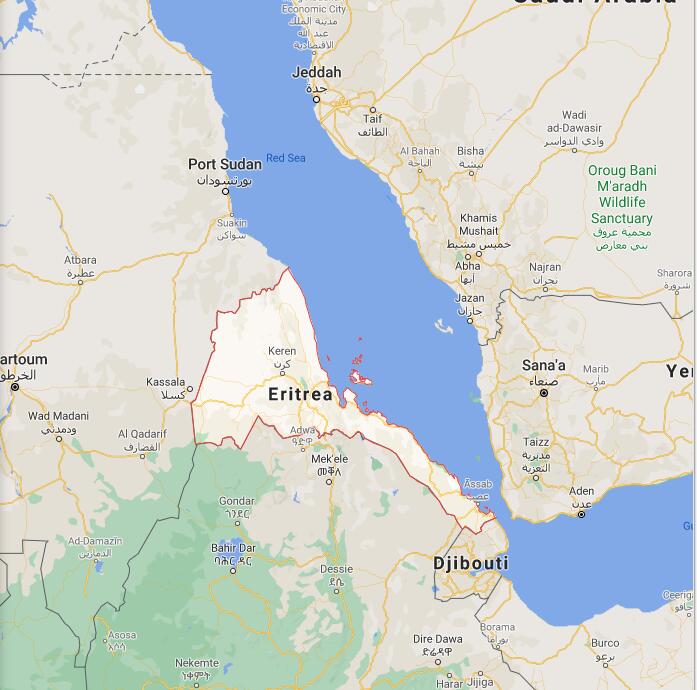 According to AbbreviationFinder, Eritrea is a coastal state on the shores of the Red Sea in northeastern Africa, in the Horn of Africa.

The country is bordered by Djibouti, Ethiopia and Sudan, with which Eritrea has a total of 1,626 kilometers. Eritrea has more coasts, or 2,234 kilometers, and also includes the Dahlak archipelago and a few islands from the Hanish Islands.

The state capital is Asmara, located in the central parts and inhabited by about 600,000 people. The entire country has a population of about 5.65 million and a land area of ​​about 117,600 km².

There is no official language in the country, but the majority of citizens are Tiger-speaking Christians. A large Muslim minority speaks Arabic. English and Italian are also available.

Food and drink
Eritrean food is largely made up of spicy dishes and is very similar to Ethiopian food. Middle Eastern dishes such as Shahan-ful (papupata) served with pita bread are often available everywhere, but more commonly this is eaten for breakfast or brunch. The traditional food in the countryside is injera, a rushing bread that is eaten with a sauce called wat or tsehbi. Fruits such as mango and papaya are popular local delicacies due to their tropical climate. Drinking tap water is not recommended. All water and beverages must be industrially bottled. Salads and vegetables should also be rinsed with bottled water. Heated or tablet-purified water can be drunk. The food should be heated or cooked. Reheated foods and seafood should be avoided.