Kyrgyzstan. In a controversial referendum in February, voters had to decide whether President Askar Akajev would remain until the end of his term of office in 2005. According to official results, 77% answered yes. The opposition had demanded Akajev’s departure after violent political unrest in 2002.

According to Countryaah.com, Kyrgyzstan Independence Day is August 31. The referendum also applied to constitutional amendments, among other things. conversion of Parliament from two chambers to one chamber to which the members are to be elected by majority vote in one-man constituencies. These proposals were also approved. The opposition, which suspected electoral fraud, considered the constitutional changes a setback to democracy. There was also international criticism, including from the US who thought that there was not enough time for debate before the election. Observers at the site felt that many voters voted yes without knowing what the changes meant.

Kyrgyzstan agreed to allow Russia to open a military base on Kyrgyz territory during the year. Russian President Vladimir Putin inaugurated the base in October, which will house a rapid response force to combat terrorist threats in Central Asia. The Russian base is 300 miles from a US military camp set up in connection with the war against Afghanistan.

Immediately after the April Revolution, a temporary government was formed with Roza Otunbajeva as interim leader. Otunbajeva had a background from the UN system and as a parliamentarian and was considered a compromise between political factions in the country. She was inaugurated as the country’s formal president on July 3, 2010.

On June 10, 2010, violent clashes broke out between ethnic Kyrgyz and Uzbeks in the country’s second largest city, Osh, where around 30 percent of the population is ethnic Ubz (the figure is disputed). The violence also spread to the neighboring town of Jalalabad. During the first three days of clashes, around 420 people were killed and thousands more injured. Whole neighborhoods, and especially areas with Uzbek population, were burned down.

Hundreds of thousands of ethnic Uzbeks fled across Uzbekistan during this period. The background to the conflict was very complex, including the economic differences and distrust of the people groups in between in the unresolved situation just after the April Revolution.

The interim government subsequently invited an independent, international commission to investigate the events. The commission’s report concluded that assaults had occurred on both sides, but held the government partly responsible for not doing enough to protect the civilian population and found that in some cases Kyrgyz government forces had been involved in attacks against Uzbek neighborhoods. A more detailed report on the June events of the Norwegian Helsinki Committee and the Human Rights Center Memorial was published in 2012. 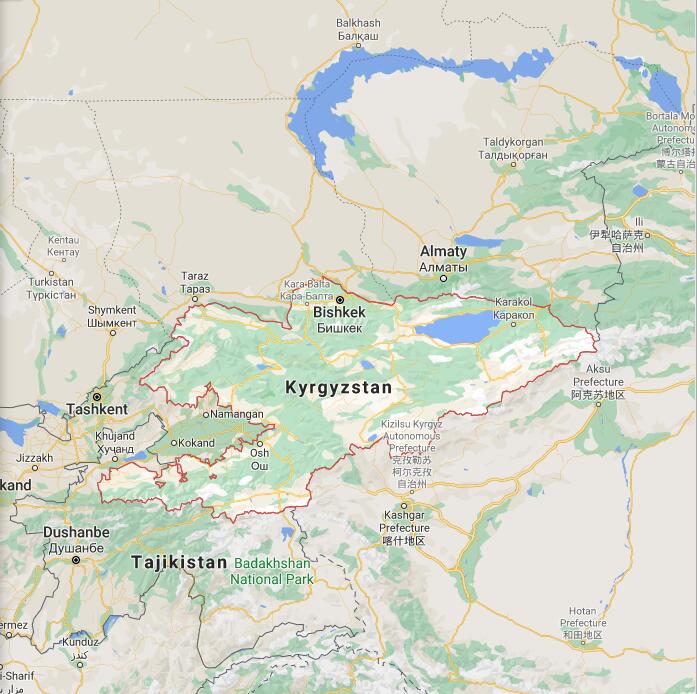 According to AbbreviationFinder, The Kyrgyz Republic, or Kyrgyzstan, formerly Kyrgyzstan (Kyrgyz: Kyrgyzstan, sometimes also Kyrgyzstan) is a landlocked state in Central Asia. Its neighbors are the People’s Republic of China, Kazakhstan, Tajikistan and Uzbekistan.

Food & beverage
Lagman is a traditional food used in northern Kyrgyzstan. Lagman is a handmade noodle in a meat vegetable broth. Another traditional dish is manti, ie dough dumplings stuffed with meat or onions. In southern Kyrgyzstan, pilaf is a risotto-like dish. The most commonly used meat is mutton, including chicken, beef, turkey and goat, as well as pork, except among Muslims. It is typical for locals to eat one bigger meal a day as well as several snacks. Water and beverages must be industrially bottled. It is also a good idea to rinse fruits and vegetables with bottled water. Heated or tablet-purified water can be drunk. Reheated foods should be avoided. Hygiene is worth paying attention to. When cooking, it is worth peeling vegetables and fruits.

Annexed by Russia in 1864, in 1918 the Kyrgyzstan became part of the Republic of Turkestan ; Autonomous republic since 1926, it entered the USSR in 1937. Independent state since 1991, in 1993 it promulgated a Constitution that introduced a parliamentary type of government. Extremely backward, it was particularly affected by the disintegration of the Soviet market and the transition to a market economy, which caused a decline in production, an increase in crime and an increasing spread of corruption. Further elements of instability consisted of the rekindling of the ethnic conflict between the Kyrgyz and other minorities (Russian and Uzbek), and the conflict between the president with dictatorial powers A. Akayev and the opposition forces (of communist and nationalist inspiration), which, after Akayev’s re-election in 2000, resulted in serious unrest during the disputed administrative elections of 2002. In 2005, yet another electoral falsification caused large-scale riots (Tulip Revolution), which led to Akayev’s flight and the subsequent election of Kyrgyzstan Bakiev, former collaborator of Akayev and former prime minister, with whom the opposition undertook a long tug-of-war to obtain greater guarantees of democracy. In the 2009 presidential elections, Bakiev was confirmed with a large majority of votes, but in 2010 a forceful action by the opposition, led by R. Otunbayeva, forced him to resign, ad interim and, in July 2010, that of president. The provisional government has promoted an important constitutional referendum, which has removed powers from the presidential role by granting them to Parliament. At the consultations held in November 2011, A. Atambayev, former prime minister in 2007 and then in 2010, was elected president; the president’s Social Democratic party obtained around 27% of the vote in the October 2015 legislative elections, while the opposition alliance Respublika Ata Zhurt stood at 20.1%.

At the referendum held in December 2016, a constitutional reform proposed by the government was approved with 80% of votes in favor, according to which greater powers are conferred on the premier, substantially limiting those of the other institutional authorities, and also allowing President Atambayev to reappear at the helm of the country as prime minister. In October 2017 S. Jeenbekov, former Prime Minister of the country, was elected president with 54.3% of the votes, who resigned in October 2020 following the popular demonstrations that led to the cancellation of the consultations parliamentarians held in the same month, won by the Social Democratic Party of the politician; the presidential elections held in January 2021 recorded the victory of S. Japarov, who obtained 80% of the votes.