Morocco. According to Countryaah.com, Morocco Independence Day is November 18. 33 people, plus 12 assailants, were killed May 16 in several largely simultaneous explosions in Morocco’s commercial center Casablanca. The blast attack targeted a Spanish restaurant, a Jewish center, a hotel and the Belgian consulate. More than 1,000 people were arrested in a wave of arrests the weeks following the attacks. Of those arrested, over 600 were reported to be suspected of direct involvement in the Casablanca attacks and the rest for other Islamist-motivated crimes.

In August and September, at least 140 people were sentenced in accordance with new tougher anti-terror laws. Six of the convicted received the death penalty, three life imprisonment and the other received imprisonment for up to 30 years. Human rights organizations expressed concern that the speedy legal processes did not give the defense side sufficient opportunities to present their testimonies.

US Secretary of State Colin Powell visited Morocco in early December, promising to double US military aid to the country and quadrupling the economic.

Editor Ali Lamrabet was sentenced May 21 to four years in prison for insulting King Muhammad VI in satirical articles and cartoons. A higher court later reduced the sentence to three years.

The distribution of power in the country’s municipal parishes remained largely unchanged after the local elections on September 13. The country’s two largest political parties, the Conservative Istiqlal and the Socialist USFP (Union Socialiste des Forces Populaires), received a total of 30% of the vote. The only permissible Islamist party, the PJD (Parti de la Justice et du Développement), made up only one-fifth of the constituencies and therefore did not take home more than 2.5% of the total 23,000 seats at stake. The turnout was 54%.

Morocco’s Supreme Court has imposed sentences of up to life in prison for 23 Western Saharans convicted of involvement in events in 2010 in which eleven Moroccan police officers and two Sahrawi civilians were killed (see 19 July 2017). Morocco, which occupies Western Sahara, and the Saharan liberation movement Polisario accuse each other of provoking the violent clashes, which have sometimes been called a “Saharan intifada”. Four of the Saharians have served the prison sentences they were sentenced to in 2013, the other 19 are still being held.

Escalation in conflict over Western Sahara

The Moroccan government is launching a military operation to open a road to Mauritania via Western Sahara, which is occupied by Morocco. The next day, both Morocco and Mauritania state that freight transport along the road via the Guerguerat border crossing has resumed (see 21 October). The Western Saharan liberation movement Polisario reacts by denouncing a ceasefire that has prevailed for almost three decades. Polisario also claims to be mobilizing “thousands of volunteers” to resume the armed struggle against Morocco. The outside world hopes that the parties will resume negotiations on the future of Western Sahara with the UN as mediator.

The King of Morocco supports plans for a national vaccination program against the covid-19 virus pandemic, which has been proposed by experts. Exactly when and which vaccine is involved is not clear, but Morocco is participating in clinical trials conducted by the Chinese company Sinopharm. The company has promised to deliver ten million vaccine doses to Morocco before New Year if the trials turn out well. Infection rates in Morocco have risen during the autumn, reaching over 5,000 new cases per day. Almost 4,400 deaths in total have been confirmed since March.

Doctors and teachers on strike

The trade union SIMSP is taking out doctors in public care in a two-day strike. Emergency physicians and physicians caring for patients with covid-19 pandemics are excluded. Behind the strike are demands for better working conditions and access to better medical equipment. The day before, contract teachers have launched a five-day action in protest against the fact that people who participate in strikes can be punished with salary deductions.

The United Arab Emirates opens a consulate general in El Aaiún (Laayoune) in Western Sahara, which has been occupied by Morocco since 1975. No less than 15 African countries have established diplomatic missions in the disputed territory since the end of 2019, but the emirate consulate is the first to open. of an Arab. Morocco’s foreign minister expresses satisfaction and sees it as a recognition of Moroccan supremacy, while the Western Saharan liberation movement Polisario perceives the consulates as a violation of international law. At the end of November, the Moroccan court states that Bahrain will also open a consulate. 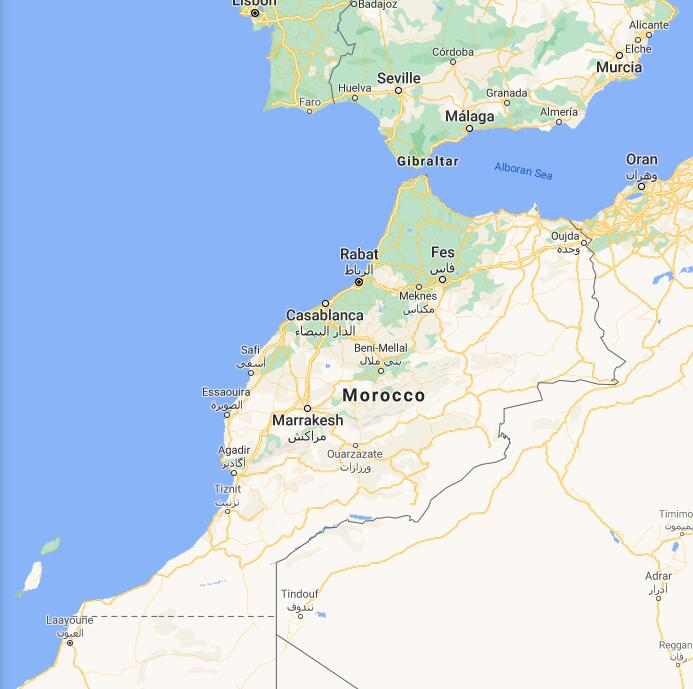 The Kingdom of Morocco Brief Guide

According to AbbreviationFinder, Morocco is a state in northwestern Africa. To the east, Algeria is the border. Morocco has a long coastline that stretches from the Atlantic Ocean through the Strait of Gibraltar to the Mediterranean. Morocco’s southern border is controversial. Morocco’s climate is a Mediterranean climate that becomes more varied towards the interior of the country with the mountains.

Food and drink
Moroccan food is often inexpensive and delicious. Traditional dishes such as tagine pots, lamb dishes and couscous are worth trying. Foods are often prepared in conical clay pots where meat and fish stews are cooked. Tajine is a kind of Karelian roast, but it has used more spices like; cumin, coriander, ginger and saffron. The portion also includes dates and almonds. Kefta mkaoura tagine is meatballs stewed in tomato sauce, to which a few more eggs are added. The paste is a pie made from a thin puff pastry that combines both savory and sweet flavors. Inside the pie are almonds, a pigeon or chicken, an egg, ground almonds and saffron. A layer of icing sugar and cinnamon, sometimes also honey, is added to the pie. Couscous is also known as couscous, which is an additive made from ground durum wheat. Couscous is also a Moroccan national dish originally native to the Berbers. Usually couscous is part of the main course, but it is also suitable for salads as well as for dessert. You should also try the local wine as well as the sweet mint tea which is the national drink in Morocco. Alcoholic beverages are now more readily available, especially in tourist-oriented hotels and restaurants. In cities, tap water is drinkable, but elsewhere you should buy bottled water.

Climate
The mountain climate of the Atlas Mountains is unpredictable and may change in a short time from summer to winter, so participants should be prepared for sudden changes in weather conditions. Weather changes may also cause changes to our tour schedule.