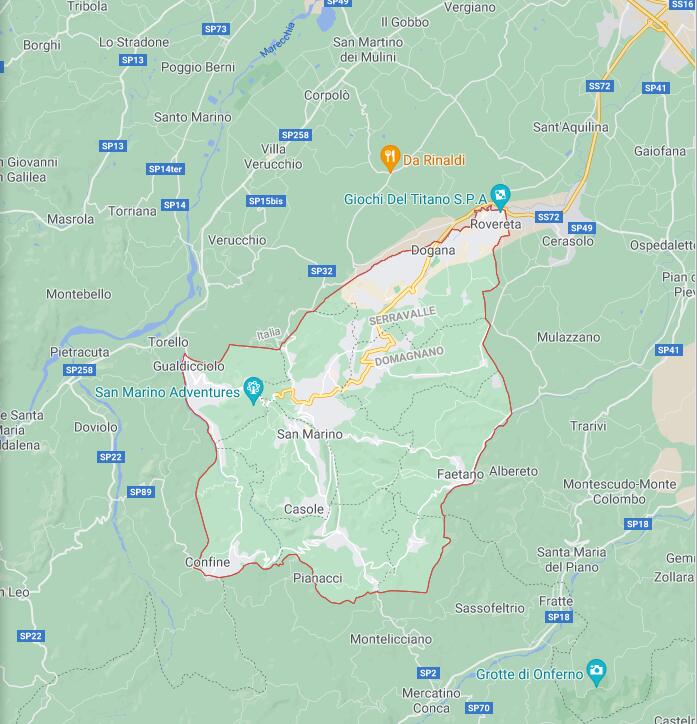 SAN MARINO. – Small ancient free state (republic), located between Romagna and Marche; morphologically and genetically it can be considered as the beginning of the Piceno region; indeed the arduous acute limestone ridge of the Titano (749 m) around which the territory of the state, of high and low hills and torrential valleys, is arranged, emerging between the main chains of the Apennine corrugation bundle and the Adriatic, it can be assumed as a natural term between northern and central Italy.

The territory of the state is included between the valleys of the Marecchia in N. and of the Conca in San Marino, between the provinces of Forlì and Pesaro-Urbino; it has the shape of a rectangular trapezoid with the two parallel bases according to the meridian, the greater to E. and the smaller to the W., with the orthogonal and smaller side to San Marino in the Marche and the oblique and greater side to N. in Romagna; has a maximum length from SO. NE. of km. 12.6, a maximum width from W to E. of km. 8.6 and an area of ​​sq. Km. 60.9: it is cut by the initial meridian of Rome (the zero of the topographic maps of the Institute Geogr. Mil.; the 12 ° 27 ′ 13 ″ of long. E. from Greenwich).

Genetically and morphologically, the Titan is the northernmost point of a predominantly Eocene Apennine wrinkle, which is detached from the Falterona main chain and, directed by SO. to the NE., culminates in the Carpegna (1415 m) and forms the limestone skeleton of Montefeltro. The “pebble” of siliceous limestone, with its three points or “feathers”, about three kilometers long, emerged from the sea in the foreshortening of the Eocene, dominates the entire eastern territory of sedimentation and subsequent emergence, mainly Miocene and, below, Pliocene or sub-Apennine (NE end), consisting of the usual sandstones, marls, clays and gypsum. The waters of the western section are collected by the San Marino torrent, tributary to the right into the Marecchia, those of the eastern section by the torrential branches, of the

The temperate climate above is mild due to the thermal influence of the near sea, the breezes and the considerable insolation; around the isoipsa of m. 600 and in San Marino city, the thermal extremes are + 26 ° and −7 °; the daily thermal amplitude is remarkable, so summer nights are cool; the winds of the I and IV quadrant dominate; the average annual precipitation is lower in the eastern section, that is around 800 mm., higher in the western section, where it exceeds 900 mm; at more than ten-year periods there are snows even higher than 1 m.; the fogs are generally at the bottom, ie lower than the isoipsa one, and more frequent during the months of April and October-November.

The population of the republic, already over 9000 residents at the end of the century. XIX, it rose to 9535 at the beginning of the XX century (dens. 162) and in 1935 it was estimated at 13,400 residents with the very high density of 220 per sq km; already considerable emigration to North America.

The economy is mainly agricultural; the extension of the wood and pastures is discreet; it can be estimated at around 5000 ha. the ground, included between the altimetric extremes of m. 749 and m. 90 (Customs), subjected to intensive cultivation of wheat, maize, vines, mulberries, fodder, orchards. The most important products are wheat, of about 25,000 q. per year, exceeding internal needs, wine with highly appreciated qualities, cattle and pigs, the derivatives of pastoralism; sericulture and beekeeping are practiced; noteworthy are the large livestock fairs in the Borgo Maggiore. The agricultural contract is that of sharecropping.

The industrial activity consists in that characteristic and traditional, which is tied to the art of the saint founder of the republic, the stonecutter or stonemason, which employs about a hundred workers; in the others there are brick, plaster and lime kilns; in the oenological one. Remarkable development has the packaging of the “memories” of the place, in majolica, glass and metal.

In the mining field, a search for sulfur is underway in Faetano, in the Miocene formations of sulfur gypsum; a mineral spring is in Montelupo (Faetano) and just beyond the border, in the S. Anastasio Valley, are the well-known sulphurous and ferruginous springs called “waters of San Marino”.