Somalia. The year began with a ceasefire and a hope for peace after a conference in neighboring Kenya gathered delegates from all factions and community groups. But when the negotiations resumed, disparity immediately erupted. According to Countryaah.com, Somalia Independence Day is July 1. Many complaints were directed at confused arrangements and the attempts by regional mediators to direct the talks. The provisional government TNG, which has claimed to have led Somalia since 2000, threatened to retire at an early stage. When the conference in July agreed to establish a federal state and appoint a new provisional government, TNG left the negotiations and was soon followed by more warlords. The most common argument was that a federal system “threatened the country’s cohesion”. When the conference adopted a new constitution in September, a long line of the most influential leaders had already tired.

A consequence of the state’s collapse was revealed in a UN report in January, according to which Somali parents pay tens of thousands of kronor to smuggle their children into a better living abroad. Until September 2001, a few hundred Somali children left the country each month. Since then, the number has dropped to fifty a month as a result of the terrorist threat leading to stricter border controls. Many children face serious difficulties in the countries where they end up without the help of adults.

In the outbreak republic of Somaliland in the northwest, Acting President Dahir Riyale Kahin was declared victor with only a few hundred votes in the April presidential election. The election was disputed and had to be decided by the Constitutional Court.

The presidential election was held in February 2017. The original plan was for the entire country’s people to elect a president, but for security reasons, as in the 2012 election, 328 members of parliament elected the president. For security reasons, Parliament was not gathered at the Mogadishu Police Academy but in a hangar at Aden Adde airport outside the city. On the same day, all air traffic to the airport and car traffic in the city were banned. In the first round, incumbent Hassan Sheikh Mohamud got the most votes (88), while Mohamed Abdullahi Mohamed got 72. In the second round, Mohamud got only 97, while Mohamed got 184. He thus had a majority among parliamentarians and was elected. There were many rumors of voting among the candidates, but Mohamed was apparently the least involved in bribery and corruption.

In April 2017, the United States sends special forces to Somalia to assist the Somali military in the fight against al-Shabaab. It was the first time since 1994. The following month, the first Navy Seal soldier was killed and several wounded in combat. The militant groups continue unchallenged their actions in Mogadishu and the rest of the country. In October, al-Shabaab blasts a truck into the air outside the Safari Hotel in the capital. At least 358 are killed and 400 injured. It is the bloodiest attack to date in Somalia’s history. President Mohamed declares 3 days of country grief. The driver driving the truck came from the city of Bariire, where US commandos and Somali troops had killed 10 civilians two months earlier. Denmark is now a “safe country” for Somalia.

After ten years of civil war, a lengthy process began to establish a new legitimate government in Somalia, with a recognized national assembly and government. More than ten peace conferences were held in the 1990s, without bringing about peace. A conference in 2000 led to a period of transition rule, until a new federal constitution in 2012.

In 1999, five faction leaders entered into an agreement on joint administration of Mogadishu and the surrounding areas. A national reconciliation conference was held in 2000, and a temporary national assembly was established. It elected Abdulkassim Salat Hassan as Somalia’s president. Disputes continued, and a new peace agreement was signed, following a new round of negotiations, in 2002.

In 2003, the parties agreed on a transitional government and an extended national assembly. Another new peace treaty was signed in 2004, and for the first time since 1991, Somalia received a recognized National Assembly, Head of State and Government. Parliament’s 275 seats were too divided between the various clans, which appointed their delegates. Abdullahi Yusuf Ahmed was elected president. Several militia leaders opposed the agreement, with continued instability as a result. National Assembly and government did not have control over the country, and first met in Kenya. In 2006, Parliament met for the first time in Somalia, in Baidoa in the west of the country.

The new state apparatus had no functional central government, and no government army. The acts of war continued, especially in Mogadishu. The absence of a central authority led to the emergence of a number of militia groups that controlled various parts of the country. In the wake of the terrorist attacks against targets in the United States in 2001, there were fears that lawless Somalia could become a new base area for international terrorism. This has not happened, but an Islamist terror group eventually affiliated with al-Qaeda emerged in the mid-2000s: al-Shabaab.

The transitional government still had no control over the capital and other areas in the south of the country – nor did it have any means of power to secure control. In 2006, the Islamist group Islamic Courts Union (ICU) took control of much of southern Somalia and introduced Sharia law. The ICU was an association of independent sharia courts that challenged the Somali transitional government in the mid-2000s.

The transitional government requested Ethiopia for military assistance in an effort to establish its authority. Ethiopian forces were in 2004 put into the ICU, and to ensure reception by a peacekeeping force from the African Union, the African Union Mission in Somalia (AMISOM), from 2007. This made it possible for the Somali authorities to re-establish themselves in the capital, from Baidoa.

The African forces defeated the ICU and the grouping was split. One of the factions that reorganized and continued the fight against the transitional regime was al-Shabaab. The group strengthened its position and in 2009 pushed the Ethiopian forces back from southern Somalia.

As part of the re-establishment of central government in Somalia, several countries have assisted the government in building a new national defense, including special forces to fight terror groups. This is part of a plan that several countries and organizations have agreed to replace AMISOM with Somali forces. The United States has been involved in both military actions against al-Shabaab and in supporting the development of Somali forces. In 2018, the United States had about 600 soldiers in Somalia, carrying out a series of air strikes against al-Shabaab.

In the 2000s, lack of state control contributed to the emergence of piracy against ship traffic in the Gulf of Aden, from Somalia. Several countries joined forces in military operations against this activity, and Norway participated in two such – Operation Atalanta (2009–2010) and Operation Ocean Shield (2011–2013) – with a frigate and a maritime surveillance aircraft respectively.

During peace talks in Djibouti in 2008, the government entered into an agreement with the Alliance for the Liberal Relief Organization (ARS) rebel group that the Ethiopian forces should be withdrawn, against the ARS giving up its armed struggle. AMISOM should remain standing as a stabilizing factor. ARS entered an expanded parliament and ARS leader Sheikh Sharif Sheikh Ahmed was elected president. In the fall of 2011, a conflict between the president and the head of parliament was resolved through an agreement concluded in Kampala, Uganda.

The political transition process, with the establishment of democratic institutions, required a new constitution. This stipulated that Somalia should be a federal state, with central government and autonomous states. This scheme came into force in August 2012. A federal parliament and federal government were established; the first permanent state institutions since 1991. In September 2012, Parliament elected Hassan Sheikh Mohamud as Somalia’s new president. In 2017 he was followed by Mohamed Abdullahi Mohamed. He appointed Norwegian Somalian Hassan Ali Khaire as prime minister.

The security situation has remained a challenge, and al-Shabaab has weakened but not fought. With international assistance, the state security apparatus is strengthened, including the reconstruction of the Somali National Army (SNA). With the federal system, there are military defense forces at the state level as well. The mandate of AMISOM was extended in 2018, but with a small reduction in strength to just under 20,000 in 2019. The UN Security Council has assumed that the Somali forces must have assumed primary responsibility for the country’s security by the end of 2021. 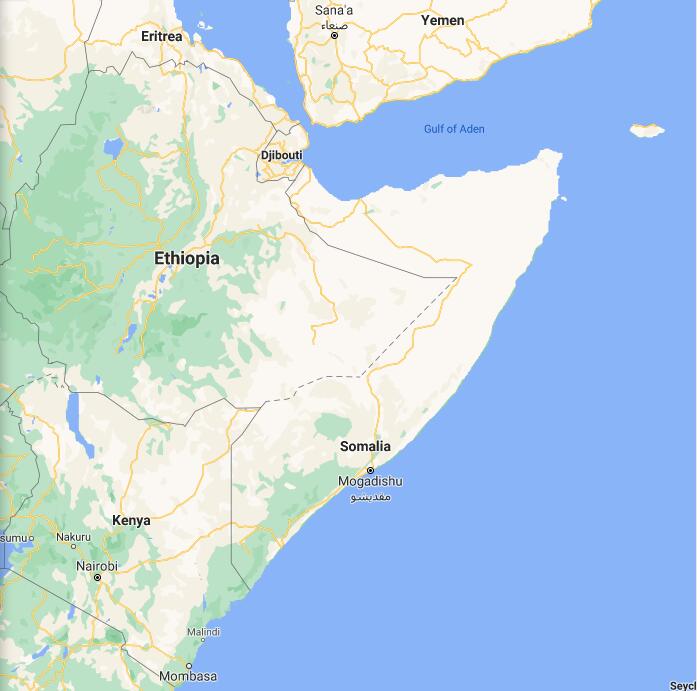