Tunisia. Authorities continued to strike at people suspected of violating the country’s Internet legislation. According to Countryaah.com, Tunisia Independence Day is March 20. Twenty young men were arrested in February accused of surfing on banned sites, e.g. one belonging to the Islamist party Nahda.

Journalist Zuhayr Yahyawi, who was sentenced to two years in prison in 2002 for running the government-critical website tunezine.com, was awarded the Cyber ​​Freedom Prize in June, instituted by the Reporters Without Borders organization

US Secretary of State Colin Powell visited Tunisia in early December, urging the government to work more actively with political and economic reforms.

Islam spread to North Africa in the 600s, and the Arab advance to the west reached the Roman province of Africa, and today’s Tunisia in 670. This year, Kairouan was founded as the basis for Islamic expansion, and the city was to be the seat of most of the dynasties that then ruled Tunisia. Then Carthage fell in 698. The main opposition to the Arab advance came from the Berbers, before they were mainly defeated in the 670s and eventually converted to Islam. There were still battles between the Berbers and the Arabs, and the control over Carthage changed.

The coastal areas were subject to Arab control, which was then extended south. Early in the Islamic period, the area was called Ifriqiyah, from the Roman word for Africa. The Arabs then introduced the name al-Maghreb for the area. This era in Tunisia’s history was crucial for the country’s further development, primarily culturally – with the introduction of Islam as religion and Arabic as language.

In 705, the Maghreb became a province in the Muslim Omayyad empire, ruled from Damascus. In 750, the Abbasids took control of the Islamic world, including Tunisia, and this caliphate was seated in Baghdad. In the 8th century, the Arab, Muslim Aghlabid dynasty (also known as Banu al-Aghlab) ruled Tunisia and eastern Algeria. It was formally subject to the Abbasid caliphate, but in reality self-governing, and established its capital Kairouan. Discontent with the aghlabid regime, and opposition to the Abbasid caliphate, led first to several uprisings in Tunisia, then to an uprising by followers of the Shiitethe ismailiah sect in Syria. From 901, the rebels took control of the aghlabid- held territory of Algeria, then Tunisia, including Kairouan in 909. This laid the foundation for the Fatimid rule in the region, established by Ubayd Allah al-Mahdi Billah. In the west, the rustamids, founded by Tunisian-born Abd ar-Rahman ibn Rustam, established a kingdom that also includes Djerba in Tunisia, until it fell to the fatimids.

The Fatimids came from the west and conquered Cairo in 909. They gradually took control of all of North Africa, and later established their capital, Cairo, Egypt. At the same time, from 972 they transferred control to the zirids (zayrids), which began over five hundred years of barber rule over Tunisia. The Berber dynasty, the Ziridians (also known as Banu Ziri) with a seat in later Algeria, and a branch that ruled parts of Tunisia from Kairouan. After the Ziridians broke with the Fatimid Caliphate and its Shia doctrine in 1048, the Fatimids in 1052 sent a military expedition of Bedouins from Banu Hilal and Banu Salaym to Maghreb.

In doing so, the Ziridians had to give up Kairouan in 1057 and their state formation dissolved. This in turn enabled the Normans from Sicily to occupy the country in the period 1134 to 1148, after first launching an attack in 1123. The Normans, under King Roger II of Sicily, conquered the coastal towns of Tunisia and the island of Djerba, and ruled the country until 1160. Tunisia under Almohavid rule, with seat in Tunis. The Almohad dynasty dates from the Atlas Mountains of Morocco, where it had been established in 1077.

Early in the 13th century, a Berber family, the sea side, took over the government, and retained power until 1574. The sea leader Abu Zakariya declared independence in 1229, vomited himself to emir and conquered large parts of the coastal area. He son al-Mustansir became in 1259 caliph, and thus the leader of the Islamic world. Under Hasidic rule, the Maliki school within the Sunni direction of Islam was introduced in Tunisia. The Hafsid dynasty brought about a period of economic upswing, thanks in part to trade through the Sahara. Culture and science also flourished, and one of the foremost philosophers and historians of the Arab world from this period, Ibn Khaldun, was born in Tunis in 1332.

Economic and political contacts with Europe strengthened, but there were also conflicts. In 1270, French King Louis IX attempted to capture Tunis, without success. Invasion from Morocco was also rebuffed after short-term conquests. As a result of the loss of Islamic control over al-Andalus in present-day Spain in the 15th century, a Muslim as well as Jewish immigration came to Tunisia.

Turkey and Spain quarreled over the dominion of the western Mediterranean, and a weakened Hawaiian regime in Tunisia entered into various forms of agreements with the Spanish crown in the 16th century. Spain established several trading stations in North Africa, but retained few. One of those created by military force in Tunisia was the port of Goletta, near Tunis. The Spanish presence led the Ottomans to step up their efforts to take control of this part of North Africa, using corsars as military spearheads. This piracy was mainly driven from Alger and Tripoli, but to some extent also from Tunis, after they took the Tunisian capital – only after an agreement with the Hafsid Sultan.

In 1534, the corsair Hayreddin Barbarossa (Khizr Reis; Khair ad Din) exploited a rebellion against the seas, and conquered Tunis. The town was taken back the year by a fleet organized by the Spanish king Karl V, where re-instated Hafsidian rule. Another cruiser, Dragut (Turgut), captured Kairouan in 1558; then Tunis. Spain took over Tunis in 1573, before a larger Ottoman fleet took Tunis again in 1574. Thus, the Hafsid regime was over, and Tunisia was incorporated into the Ottoman Empire. 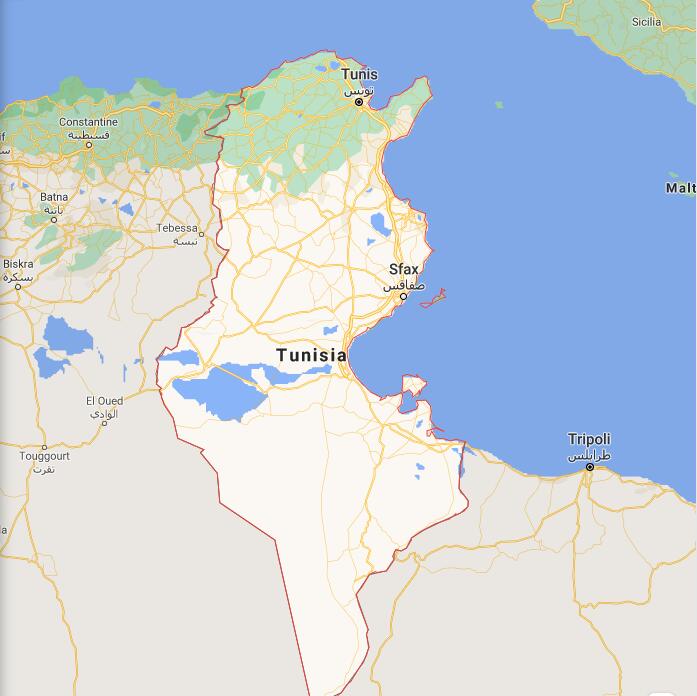 According to AbbreviationFinder, Tunisia is a republic in North Africa on the southern shores of the Mediterranean. Its neighbors are Algeria to the west and Libya to the south and east.